It is hard for anyone to maintain a smile in the face of a person who says mean things and it doesn’t matter how old you are. Words can always hurt people’s feelings. When people work in front of a camera on television, it can be extra difficult. People always seem to have an opinion or something to say about someone else. This was definitely the case for a newscaster in Philadelphia.

Katie Felinger is a CBS Philadelphia meteorologist and she his pleasantly pregnant with twin daughters. She is incredibly ecstatic and she cannot wait to bring her little bundles into the world. She is working while she is pregnant, like most moms all over the world do everyday and some people have a problem with that. Some of them have mean things to say about her pregnant shape.

Since she began to show and her pregnant belly began to pop, mean people said mean things. She began to get insulting comments and emails online. One comment said that she looked like a “sausage in casing” and another said that ‘sticking your pregnant abdomen out like that is disgusting.’

She knows that a job in television is going to garner criticisms, but she has always been good about ignoring people and the mean things that they say. She felt the need to fire back this time in defense of all the moms across the world since the beginning of time. Her response was perfect.

Everyone’s right to their opinion is important, but so are manners. And while rude comments like these will never make me feel the need to change anything about myself, I find a bigger underlying issue here. These particular nasty-grams were directed at a pregnant woman.

So this little manifesto of sorts is dedicated to every mother out there – other pregnant moms-to-be, moms reading this while their toddlers play on the swing set, moms whose kids have long since gone off to college…

Even during the most uncomfortable – and let’s face it, less than glamorous – symptoms of pregnancy, what women go through to bring their precious children into the world is, simply put, AMAZING and you should be lauded.

Frankly, I don’t care how ‘terrible’ or ‘inappropriate’ anyone thinks I look. I will gladly gain 50 pounds & suffer sleepless, uncomfortable nights if it means upping my chances to deliver 2 healthy baby girls. Now it’s about more than aesthetics. I want these babies to have the best start possible. And that hopefully means my belly that ‘looks like it’s about to explode!’ will continue to grow the next few weeks.

I say let’s raise a Shirley Temple to swollen feet, stretch marks, nausea, all the extra pounds and the dark circles! They’re badges of motherhood. And for those of you who think that’s ‘disgusting,’ remember a woman went through the very same thing to bring YOU into the world.

In the meantime, let’s all remember the lesson Mom taught us – if you have nothing nice to say, say nothing at all.

Making fun of someone is something that we learned as children was mean, but to make fun of a pregnant woman is just ridiculous. The things that a woman’s body can do is amazing. The ability to create life and grow a little person to bring into the world is a thing that should be celebrated. There are some women who are unable to have children and it is a battle that women go through for 9 months and there is nothing easy about it. Pregnant women are beautiful in their delicate state and should get special considerations for what they are going through. 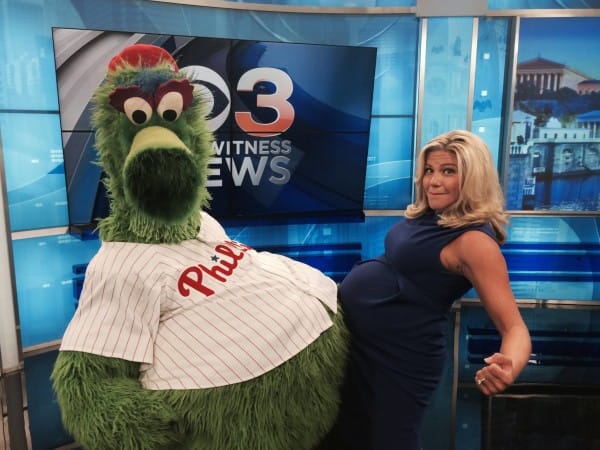 Mothers are like superheroes. They grew a person, their spit cleans anything, they can get rid of monsters under the bed, and they have eyes in the back of their heads. It is amazing to think that there are people in this world that are so mean about a pregnant woman bring life into this world. Like she said, there was a woman who brought those mean people into the world and I wonder how they would react if they knew what their kids said to a pregnant woman? Hopefully, this is a tiny minority of the people across the world because these are the kind of people who show others what is wrong with the world today.