It’s safe to say that everyone knows the importance of cleaning out that grimy dryer vent—we’ve all heard those horror stories of excess lint heating up and causing entire houses to catch fire!

Nevertheless, we recently discovered that, even if you pick at that lint screen religiously, you still may not be giving your dryer the attention that it deserves. Believe it or not, your favorite appliance may be harboring a hidden danger, and it all has to do with the method in which you wash your clothes.

As it turns out, fabric softeners of any kind, whether they be in liquid, solid, or sheet form, create an invisible film over your clothing that can really “gunk up” your lint filter.

Our trusty host from today’s video kicks off his clip by first showing us what appears to be a completely ordinary, clean lint catcher. There’s no trace of fluff or dirt; in fact, we wouldn’t think twice about sliding this back into our dryer—until we see something that really shocks us!

After displaying the “clean screen”, the man performs, what looks like, a magic trick. He runs some water over the screen, and quickly points out something rather disturbing—the liquid is not permeating the tiny holes. In fact, that spritz of water has created a pool on the screen’s surface.

It’s a terrifying sight, especially considering the fact that, at its best, a clogged lint screen can overwork a dryer which may hike up your utility bill, and at its worst, can make a fuse pop and start a fire. 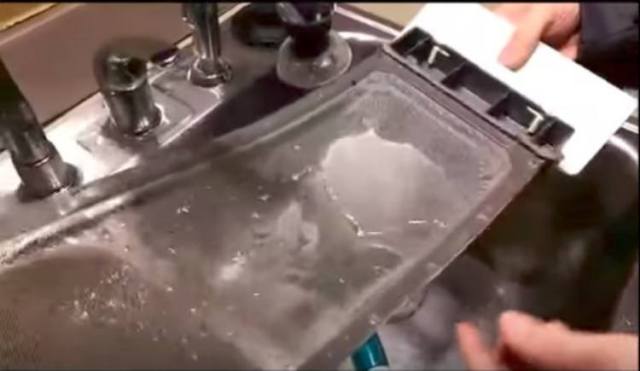 Our mother always taught us to clean that dryer vent in between loads, but we didn’t know that so much of the dangerous residue is invisible to the naked eye!

With that being said, we certainly don’t want you to worry too much—we aren’t here to try to convince you to stop using this popular laundry staple. The fresh-smelling stuff is totally safe to use IF you take the correct precautions.

Our host stresses that it’s perfectly fine to continue to use fabric softener, so long as you take the pledge to give your screen a thorough cleaning once a month. Now, this doesn’t mean your usual “scrape off the lint with your fingernail” cleaning—this requires a bit of extra effort.

All you need to do is remove the lint screen from your dryer and run it under some water (after you’ve cleaned off the visible lint). Once soaked, add a bit of liquid soap and scrub with a run-of-the-mill dish brush.

It’s a simple chore that we think is really important to adopt. To learn more about how to perform this specialized dryer lint screen cleaning for yourself, be sure to click on the video below. Once you see what a REALLY clean screen looks like, you won’t go back to your old technique ever again!

What do you think of this dryer lint screen cleaning method? Have you ever tried this yourself? Do you have a harrowing laundry-related tale that you would like to share?