For many of us, sharks are our number one fear in the water. They have terrifyingly sharp teeth and predatorily powerful muscles that allow them to be extremely dangerous and effectively rule over the sea.

It’s lucky that shark attacks are so uncommon!

But Ervin Maccarty was one of the few to discover that just because shark attacks are so rare, that doesn’t mean they never happen – and you can become part of the unlucky statistic.

Maccarty was simply enjoying a nice day out with friends on a boat when the incident happened.

Maccarty and his pals were enjoying lunch when one of the group said he had managed to catch a grouper.

Unfortunately, that grouper fish was stuck to some area of the water below, within a hole around 10 feet deep. As such, the fish simply could not be reeled in.

Maccarty offered to head down and help get the grouper free from whatever it was stuck to so that they could bring it up.

He sportingly jumped into the hole and started to work on freeing the grouper.

That’s when, out of basically nowhere, a shark came out and bit him harshly in the stomach. It’s every swimmer’s worst nightmare!

Luckily, this shark was hardly Jaws-worthy. It was just a small one, barely the size of Maccarty’s torso.

But even so, its teeth were still sharp as you may imagine, and the shark was clearly intent on ripping his stomach apart!

He had to tightly hold onto the shark with both of his hands to prevent it from continuing its biting and thrashing.

The brave man struggled to get free from the shark’s iron grip, but it just wasn’t possible, and he was running out of air.

Thankfully, he was able to use his legs to kick himself back up, taking in a grateful breath of fresh air when he broke the surface.

His friends were all looking down at him, shouting that they had seen him get bitten by a shark – but they didn’t know it was still attached to him! 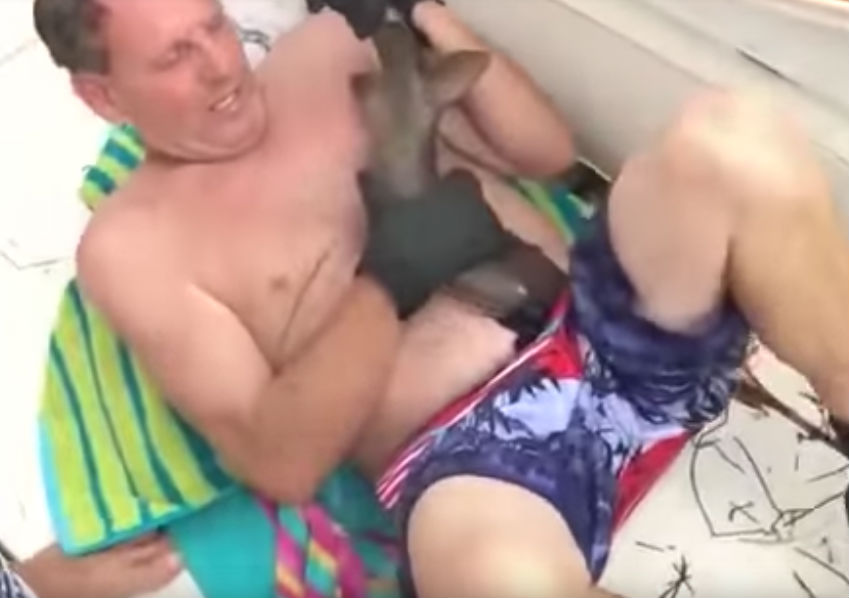 Maccarty had to use just his legs to get back onto the boat. With the help of his friends, he was able to drag himself, and the shark, aboard.

He was completely exhausted and, still holding the shark tightly, collapsed aboard and begged his friends to get it off, though he asked that they not cut the shark while it was still holding onto him as he did not want the shark’s blood all over him and in his open wounds.

Obviously, his friends saw some humor in the situation, and couldn’t help chuckling and laughing, jokingly asking if the shark had managed to get ahold of Maccarty’s genitals!

However, the pained man was not in the mood for jokes as his friends retrieved a bigger knife to free him from his attacker.

He feared he would drown while tussling with the shark in the water and is definitely glad the whole ordeal is over.

This is a testament to the fact that sharks, no matter the size, are fearless, dangerous killers – and it’s best to keep a distance from them at all times, unless you’re with professionals!