Serena Williams may not have won Wimbledon this year, but she gave it her all.

After losing the Ladies’ Single Final to German player Angelique Kerber on Saturday, Williams gave an emotional interview in front of the incredibly supportive crowd, including her good friend Meghan Markle and Kate Middleton.

“It was such an amazing tournament for me. I was really hoping to get this far,” Williams, 36, said while fighting back tears. “It’s obviously disappointing, but I can’t be disappointed. I have so much to look forward to. I’m literally just getting started.” 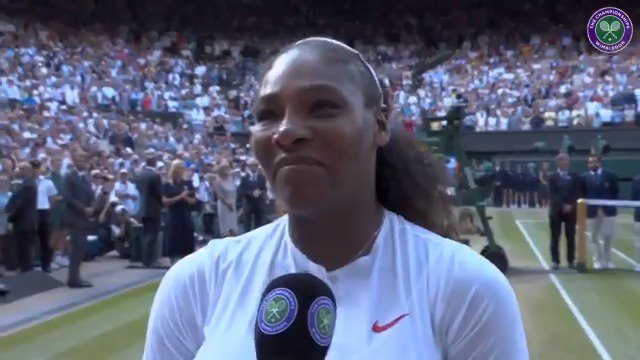 On their first-ever solo outing together, Meghan and Kate were visibly moved as they listened to Williams — who gave birth to daughter Alexis Olympia in September — share that she was playing on behalf of moms everywhere.

“To all the moms out there, I was playing for you today and I tried,” she added with emotion in her voice.

Kerber defeated Williams 6-3, 6-3, clinching her first-ever Wimbledon win. Despite her disappointment over losing the tournament, Williams shared that she was happy for her opponent.

“She’s an incredible person, Angelique is, and she’s a really good friend, so I’m really happy for her,” she graciously remarked. “This is her first title and I know she’s going to really enjoy it and enjoy the moment. So congrats again. It’s amazing.”

RELATED: Every Moment You Need to See from Meghan Markle and Kate Middleton’s First Joint Appearance

Just one week before her loss, the seven-time Wimbledon champion revealed that while she was busy training for Wimbledon, Alexis Olympia took her first steps — and she missed it.

“She took her first steps… I was training and missed it,” she wrote on Twitter, adding that she “cried” after learning the news.

Despite missing her daughter’s first steps, Williams’ baby girl previously made a sweet visit to the courts at the All England Club to cheer her mother on to victory.

Alongside a picture of the girl sitting on one of the venue’s famous grass courts, the little girl’s proud parents wrote, “Hummm that looks yummy #wimbledon go Mommy.”